The Alpha Shredder is a Monster in CrossCode. They can be encountered in the Enemy Rush challenge in the Autumn's Rise Observatory.

During combat, the Alpha Shredder will follow the player closely and attempt to attack them. Their attack has three parts. First they dash forward towards the player, stopping just short of them if they are close enough. They then charge their attack, briefly flashing red. They finish with a powerful melee slash. 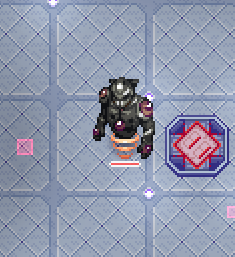 The Alpha Shredder encountered in the Enemy Rush is fought alone, and is therefore not particularly difficult. Dodging its attacks is recommended due to the high damage.

The Alpha Shredder was first introduced with the release of the Demo. It has appeared in all subsequent game releases except the Shortened Demo.