From CrossCode Wiki
Jump to: navigation, search
Welcome to the Official CrossCode Wiki
a user-created database on CrossCode from Radical Fish Games.
Please feel free to contribute by creating new articles or expanding on existing ones.
We are currently maintaining 3,500 pages (383 articles). 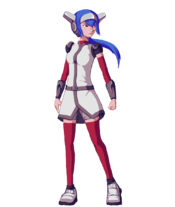 CrossCode is a retro-inspired 2D Action RPG set in the distant future, combining 16-bit SNES-style graphics with butter-smooth physics, a fast-paced combat system, and engaging puzzle mechanics, served with a gripping sci-fi story. You follow a player called Lea as she logs into CrossWorlds - a fictional MMO of the distant future. Lea is not your average player though. She hast lost her memory and is (literally) mute. Now the only way to regain her memory is to play CrossWorlds, disovering all the places the game has to offer and meeting other players on the way - hoping they won't mistake her for a bot. As Lea’s memory returns, a deep mystery surrounding CrossWorlds will be unraveled - and you may come to understand why a mute player is stuck in this game in the first place. CrossCode combines features of the Action-Adventure and RPG genre, delivering both, a great variety of puzzles and an engaging, fast-paced combat system with plenty of options for character growth.

Take the best out of two popular genres, find a good balance between them and make a great game. That’s what CrossCode does. And it works pretty well. You get the puzzles of Zelda-esque dungeons and are rewarded with the great variety of equipment you know and love from RPGs. During the fast-paced battles you will use the tools you find on your journey to reveal and exploit the enemies' weaknesses and at the same time will be able to choose equipment and skills for a more in-depth approach in fighting your enemies.

To write a new article, just enter the article title in the box below.

Not sure where to start?