There are four Neutral Dash combat arts available to Spheromancers. Due to Circuit branching, Lea can only have two of them, a first-level art and a second-level one, active at a time. 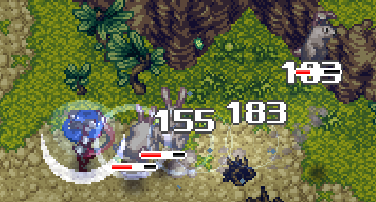 Dash right through your enemies, damaging everything in your way.

Azure Strike is a non-elemental, level one Dash-type Combat Art. It costs 1 CP to activate and 1 SP to use.

When using it, Lea dashes across a long distance, spinning rapidly and generating an azure glow around her. All enemies that she makes contact with during this move are damaged.

This is one of the basic combat arts in CrossCode. The extremely long distance of the dash makes it ideal when fighting large groups of enemies, as it is possible to dash straight through the group to flee if cornered, with the damage dealt to the enemies being a welcome bonus. It can also be useful when needing to break an enemy when there's a large group in the way.

Apollo uses Azure Strike during his first duel against Lea. It is also one of the few Combat Arts known to be available to multiple classes, as Emilie can also use it during combat, although hers gives her a pentagon-shaped aura rather than a spherical one. 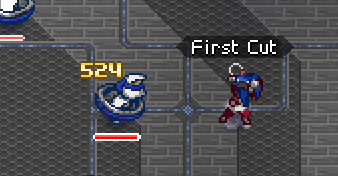 A very powerful attack that will hit exactly one enemy.

First Cut is a non-elemental, level one Dash-type Combat Art. It costs 1 CP to activate and 1 SP to use.

When using it, Lea performs a normal-looking dash with a long range. Once the dash passes through the first enemy, Lea comes to a quick stop while the enemy takes a small amount of damage and remains stunned momentarily, before taking a large amount of damage and flying backward. Any additional enemies that the dash hits before Lea can stop are passed through but completely unaffected.

First Cut is highly useful against single targets due to its high damage and the fact that its large knockback interrupts many attacks. It also specifically targets enemies, which can be useful when fighting in an area crowded with non-aggroed enemies. However, it is less useful for fleeing from groups, as the dash stops after hitting an enemy.

Dash through your enemies and ignite delayed damage spreading through nearby targets.

Azure Surge is a non-elemental, level two Dash-type Combat Art. It costs 2 CP to activate and 3 SP to use.

This is an upgraded version of Azure Strike. When using it, Lea performs a long dash surrounded by a very large spherical aura, which increases the hit area of the skill. Enemies hit by the dash take damage and weak knockback. After a brief stun period, they then explode, taking high damage and dealing weak splash damage to all nearby enemies (including themselves and enemies missed by the dash).

While Azure Surge shares the same getaway functionality as its weaker version, its increased area and splash damage make it excellent at crowd control as well. The skill can hit each member of a tightly-packed group of enemies, and deal splash damage to them all several times as well. 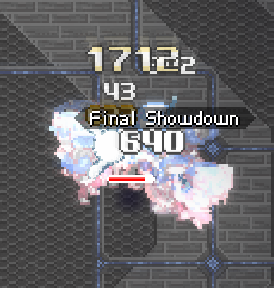 An extremely powerful attack that will hit exactly one enemy. A lot.

Final Showdown is a non-elemental, level two Dash-type Combat Art. It costs 2 CP to activate and 3 SP to use.

This is an upgraded version of First Cut. When using it, Lea dashes into a nearby enemy and immediately begins to dash back and forth rapidly through them, dealing damage each time. The enemy is slowly lifted into the air with each attack, until Lea deals a high-damage finishing move, causing the enemy to drop to the ground and Lea to land nearby. Despite the description, this attack can deal damage to other enemies very close to the main target, although they will miss the majority of the damage as they are not lifted into the air.

Despite its multiple attacks, Final Showdown mainly works as a more powerful First Cut, and the same strategies apply to using it.