There are five Cold Throw combat arts available to Spheromancers: two first-level and two second-level ones, which Lea can unlock one of each, and one third-level art. 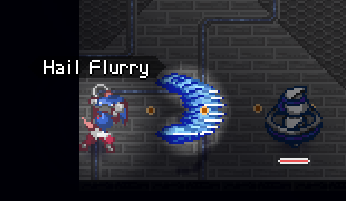 Hail Flurry is a cold-elemental, level one Throw-type Combat Art. It costs 1 CP to activate and 1 SP to use.

When using it, Lea shoots a cloud of 12 small ice shards in a straight line. The shards are destroyed when they hit an enemy, dealing damage and increasing the enemy's Chill status meter. If the shards don't hit an enemy, they can ricochet off one wall before being destroyed.

Hail Flurry is apparently a cross-class skill, as Emilie is also able to use it. Apollo also uses this art during his third duel against Lea. 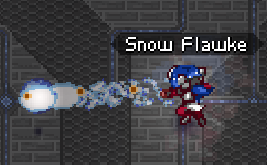 Hit enemies with a big snow explosion, caging them within icicles.

Snow Flawke is a cold-elemental, level one Throw-type Combat Art. It costs 1 CP to activate and 1 SP to use.

When using this art, Lea shoots a single large ice projectile in a straight line. If the projectile hits an enemy, it deals damage to them and slightly raises their Chill status meter, while if it hits a wall it simply stops. In either case, a ring of ice spikes generates around the point where the projectile hit. These spikes are collisionless to party members and their attacks, but any enemy that hits them will take damage and be knocked back, destroying the spike in the process. Any spikes that aren't hit by the enemy disappear after six seconds.

Although this skill's damage is rather low, its main purpose is to keep an enemy in place and at a distance. It is therefore useful to restrain a particularly aggressive enemy, giving you some breathing space and an opportunity to heal. It can also be useful to split up a group of enemies, allowing you to delay some of them while you deal damage to the others. 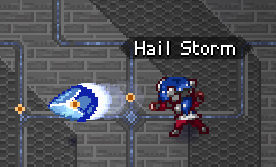 Hail Storm is a cold-elemental, level two Throw-type Combat Art. It costs 2 CP to activate and 3 SP to use.

When using this, Lea shoots a single large icicle that passes through enemies, dealing moderate damage. The icicle bounces once off a wall and disappears the second time, both times leaving behind clusters of ice spikes. After a short interval, the ice spikes explode, launching seven small homing projectiles each. These secondary projectiles are moderately homing, but start directed outward from the obstacle; they are more likely to hit if an enemy is in their line of fire. Both the primary and secondary projectiles increase the enemy's Chill status meter.

This is essentially a more powerful version of Hail Flurry suitable for dealing with large groups of enemies. The initial shot passes through them, dealing damage to multiple targets, and while the smaller projectiles do not, they can be made to hit the group from both sides, and their homing means that careful aiming is not as necessary here. The cost of this is of course that the smaller projectiles aren't directly controllable, so many of them could miss on a poorly-planned shot.

Frigid Flawke is a cold-elemental, level two Throw-type Combat Art. It costs 2 CP to activate and 3 SP to use.

When using this, Lea shoots a single very large snowball. The ball leaves a trail of ice spikes in its wake. Upon hitting a wall or an enemy, it creates a blast dealing high damage and boosting the Chill status meter of all nearby enemies. It also creates two concentric rings of ice spikes around the point where it hit. The ice spikes behave identically to those created by Snow Flawke. They are intangible to party members, deal damage and knockback and are destroyed when hit by enemies or vanish after six seconds.

As an upgraded version of Snow Flawke, this art can deal significant damage to several enemies and is much more effective at hampering their movement. The large number of ice spikes generated makes the entire area impossible to move through for enemies, giving Lea a significant amount of time to evade them, heal, attack or plan her next move.

Summon an Ice Turret with spikes around you and blast your enemies away with a volley of icicles.

Gatling Arctillery is a cold-elemental, level three Throw-type Combat Art. It costs 3 CP to activate and 6 SP to use.

When used, Lea encases herself in an ice turret surrounded by icicles for protection. She then charges up and fires a controllable stream of non-piercing icicles that can chill the enemies hit.

Shizuka uses this combat art when she duels against Lea. 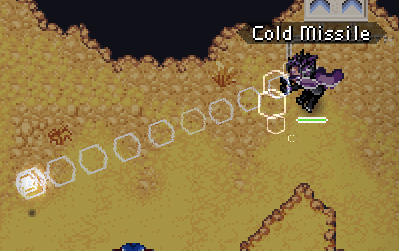 When using this, C'tron shoots a single large hexagonal ball at the enemy. On a hit, the enemy takes a small amount of damage and is surrounded by a swirling aura for a second, after which it explodes, taking substantial Cold damage and boosting its Chill status meter by a large amount. The explosion also damages nearby enemies and generates a small number of ice spikes around the target, similar to those created by Snow Flawke. If the ball does not hit any enemies, it has no effect and does not bounce on walls.