Gaia's Garden is a location in CrossWorlds. It is the largest area in the game, an immense jungle located to the northeast of Rookie Harbor. It can only be reached after completing Faj'ro Temple.

The area's main entrance from Autumn's Fall leads to a crossroads, where continuing straight will lead to the city of Basin Keep. The left and right paths wrap around the city, eventually meeting up at the three temples of the Grand Krys'kajo. Three sub-areas can be accessed from this ring path: the swampy Royal Grove to the northwest, the shady, mushroom-filled Infested Marshes to the northeast, and Vr'da Vil to the southeast.

Vr'da Vil is a Shad village, and the fifth town reached in the game. It is also the only town that is part of a larger exploration area, rather than being a separate area. Most of the inhabitants are quite hostile to humans, due to some past incident that involves the Wiccats that infest the northern areas of the village; the Shad blame the infestation on the humans' power plant near the temples. The villagers' trust has to be regained by completing a mandatory storyline quest.

Gaia's Garden has by far the largest number of chests of any area, having at least twice as many as any other area except Maroon Valley. Many of these are not initially accessible, and require either the

Radiant Key from the So'najiz Temple, or the Wave element from the Zir'vitar Temple (to use a Wave teleporter) in order to access them. 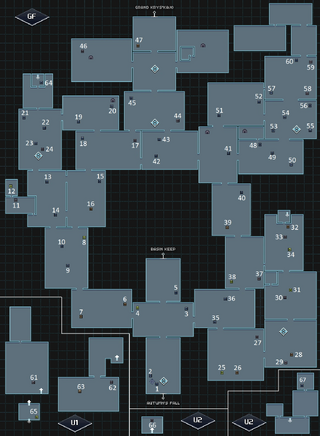 Map of chests in Gaia's Garden

The following botanics can be found in Gaia's Garden:

There is only one trader initially but more can be unlocked through quests. The Vr'da Vil trades are particularly notable, as they offer sets and metals for fewer trade items than anywhere else in the game, and are therefore very useful when obtaining late-game equipment.

The quests that can be started in Gaia's Garden are:

Turret Tokens to spend at traders.

The Lost Shrine contains a miniboss which is necessary to complete the A Promise Is a Promise 4 quest. The shrine is locked with a code, which can be found on a plaque behind Grand Krys'kajo.