As part of the Unified Community Platform project, this wiki and 38 others will be migrated to the new platform, with migrations beginning September 23rd at 7am CDT. Minimal changes are expected as part of this migration. Read more here.

Pentafists are a class in CrossWorlds. They are associated with pentagons, the color orange and the Shock Element. They represent the Virtue of Agility. 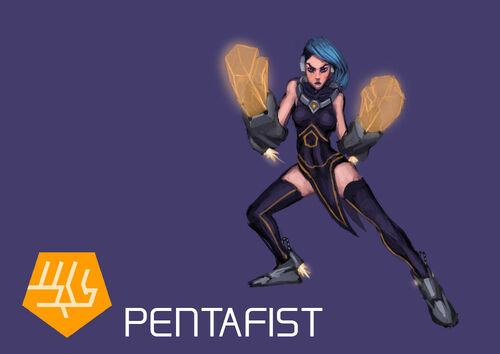 Pentafists are a Melee class focusing primarily on speed. Their attacks are weaker and shorter-range than those of the other Melee classes, but they compensate for this with a very high attack speed and critical hit chance. They are a physically weak class, and are heavily reliant on dodging and Dashing, which are improved by small thrusters built into their class-specific armor. Their pentagon-shaped VRP are similarly weak but fast. In terms of stats, Pentafists have high Focus, but low Defense and HP. Their weapon of choice is "huge fists" - more specifically, illustrations imply that they are vambraces that project energy gauntlets during combat.

The Pentafist is a rather difficult class to master, but its flashy appearance makes it very popular among new players, leading experienced players to be very skeptical about the proficiency of newbie Pentafists.

All Pentafist characters carry feather-like metal pieces on their ear and use the color orange in their clothes.