From CrossCode Wiki
(Redirected from Playground)
Jump to: navigation, search

Raritan Gem, referred to in the game of CrossWorlds as Shadoon, is a moon of a gaseous planet in the Milky Way Galaxy. It was uninhabited until Instatainment acquired the moon and built the physical Playground of CrossWorlds. Within CrossWorlds, the Raritan Gem is given the name Shadoon, for which Instatainment has created a story about the former civilation of the Ancients and their contemporary Shad descendants.

Raritan Gem is the small, rocky moon of a large, gas giant planet orbiting a sunlike star. The planet and star have been seen in the background of several scenes, but they have not been named. The system has been said to be near Earth, but its exact location is unspecified. 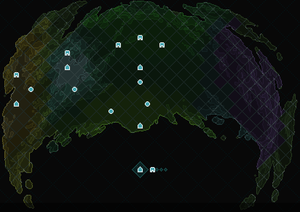 In-game map of the Croissant

The moon is mainly covered in water. There is one known continent, which is known by its player-given name, the Croissant. Other land could exist on the unseen side of the planet, particularly given the presence of large oceangoing cruise ships such as the MS Solar.

The Croissant is roughly crescent-shaped, hence its name. Its outer edge is highly mountainous, with a few hidden valleys tucked along the coastline. The shore of the central bay is lined with plains which give way to thick forests further inland. Numerous small islands lie off the coast, particularly around the points of the crescent shape. The overall shape of the continent suggests a massive, ancient crater.

Raritan Gem was terraformed by Instatainment in order to create the Playground, the playable area of CrossWorlds. It's unclear exactly how much of the moon is natural, and what features have been modified to create the game. The atmosphere contains a high concentration of gaseous Instant Matter, which makes materializing it to build things possible. The name "The Playground" is often used interchangeably with The Croissant, but the former refers specifically to those areas of Shadoon officially accessible to Seekers. Therefore, it technically includes the offshore Rhombus Square, and excludes out-of-bounds and unused areas on the Croissant.

Rhombus Square is the largest known city, and floats off the coast of the Playground in the large bay. Numerous smaller cities are known to exist on the Playground itself. The named ones are:

In CrossWorlds lore, Shadoon was formerly inhabited by the Ancients, who left long ago for unknown reasons. The current native inhabitants are the Shad, and there is also a sizeable population of human colonists.