The Red Eyed Bovine is an organic enemy in CrossWorlds. They can be encountered in Autumn's Rise and Bergen Trail.

The Red Eyed Bovine is a large, four-legged creature with prominent bull horns. It is mainly covered in shaggy dark gray fur, except for its head area, which has thick armored plates colored gray with red markings. Its entirely gray coloration differentiates it from its weaker counterpart, the Mad Bovine, which is mainly brown.

During combat, the Red Eyed Bovine slowly follows Lea around, taking care to always face her. It has two attacks that it uses. The first is a ground stomp that can be used with no warning; it generates a powerful short-range shockwave that can damage the player even if they are on a higher ledge. Its second attack is a charge, and is made clear by it pawing the ground beforehand. It charges in a straight line until it either hits the player for substantial damage, or runs slightly past them. If the Red Eyed Bovine runs into an obstacle while charging, it will be knocked out and immobile for a substantial period of time. Both attack disrupt shielding.

The Red Eyed Bovine is nearly invulnerable to damage from the front, and resistant to VRPs from all directions. 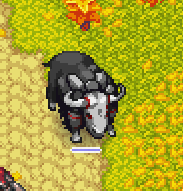 Due to the Red Eyed Bovine's damage resistance from the front, and since it turns to face Lea, typical attacking is of little use against them. The principal strategy to fight them involves standing in front of a wall and Dashing away from their charge attack, causing them to hit the wall and be knocked out. The player is then free to use Melee attacks to deal them substantial damage from behind. It is also feasible, particularly for low-level players, to lead them to charge into water, removing 10% of their health each time. Be sure to keep your distance from non-stunned Bovines, as their stomp attack can be used with next to no warning.

Other party members can greatly simplify the strategy of fighting Bovines, since they can only face one person at a time, leaving the other free to attack from behind.

Due to the special strategies required to defeat them, facing Red Eyed Bovines with other enemies can be a challenging task. For inexperienced players, the best option will be to run; the slower Bovine will quickly fall behind and lose aggression. Alternative strategies are to quickly kill the Red Eyed Bovine with Combat Arts that bypass defense, or lead it to stun itself and concentrate on the other enemies while it is stunned. For multiple Bovines, try to separate them using their charge attack, so that you can deal damage to one before the other has the chance to reach you and use its stomp attack.

In Autumn's Rise, respawning Red Eyed Bovines can be found in the Old Observatory, Pathway 5, Pathway 6, Pathway 7 and End of Autumn's Rise maps. They are also fought during the Bull Grab and Intensive Tree Care quests.

In Bergen Trail, respawning Red Eyed Bovines can be found in the Rising Path 1 and Off Road 2 maps.

The Red Eyed Bovine was introduced along with Autumn's Rise in the first version of the Demo. It has appeared in all subsequent versions of the game except the Shortened Demo.