The Rhombus Enforcer 2.0 is a mechanical enemy in CrossCode. They can be found in the Rhombus Dungeon.

The Rhombus Enforcer 2.0 is a large floating robot with a cone-shaped body. Its head, disconnected from and floating above its body, is a second cone with a swept-back, stylized tip. Its body is surrounded by a large floating ring. It is colored primarily white, with substantial blue and grey highlights.

Rhombus Enforcer 2.0s will slowly follow the player around, staying close to them but not willingly going within melee range. It has two possible attacks. The weaker attack is indicated by it briefly turning dull red, after which it dashes through the player, damaging them. The stronger attack is preceded by the enemy flashing bright red and charging the attack for a short period of time. The Enforcer then dashes at the player three times in rapid succession, damaging them on contact. Both attacks are vulnerable to disruption by charged Balls and by Melee. If the stronger attack is disrupted with a charged Ball while it is charging, the Enforcer is knocked back substantially and is stunned and weakened for a short period of time. 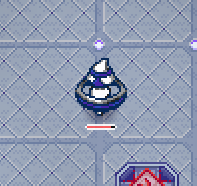 Their resistance to damage and their tendency to attack in groups make Rhombus Enforcer 2.0s formidable enemies. Attacking them while weakened is an obvious way to quickly deal with them, however the knockback from hitting them while they charge can land them in a crowd of other Enforcers, making approaching them dangerous. It can be helpful to concentrate attacks on the enemies that have wandered away from the group, while dodging weak attacks and disrupting strong ones. When trapped in a crowd of them or unable to disrupt a strong attack, dashing away is recommended.

Rhombus Enforcer 2.0s were first introduced in the original TechDemo and have appeared in all releases of the game, excluding the Shortened Demo where they were among the content cut to reduce the demo's length.