Rhombus Square is a location in CrossWorlds. It is the capital of Shadoon; a large city of tall glass skyscrapers located on an island off the coast of the Croissant. The main city is only accessible to experienced players who have progressed along the Track of the Ancients to collect the four elements and complete the Trials of the Golden Bugs quest. Until then, it is only possible to visit the tutorial region, Newcomer's Bridge, and the teleportation hub, Cross Central.

Newcomer's Bridge is a long stretch of buildings with an elevated walkway, located east of the main city. Individual stretches of the bridge are only connected by sections of the Rhombus Dungeon. CrossCentral is a large building containing a teleport hub, from which anywhere in the playground can be accessed. CrossCentral is connected to Newcomer's Bridge via sky rails, a virtual elevated transport system.

Rhombus Square has 8 chests in total, none of which can be reached before the full city is unlocked at the end of the game. 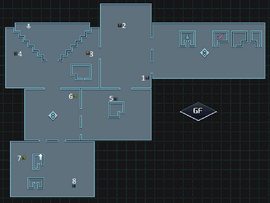 One of the main draws of Rhombus Square is the Arena. Here, players can compete in scored matches against previously-fought enemies and win Arena Coins, which can be traded for powerful equipment and cosmetic items. Details on the Arena can be found on its own page.

As it is a city, enemies can only be encountered in Rhombus Square in special situations. Only enemies encountered outside of the Arena are shown here.

The Sprout of Ages rare destructible is in the South Arch. From the position where you can destroy the blocks to make the chest of the

Very Large Ember accesible, jump north and walk into the southeast corner to reveal the Sprout

Traders in Rhombus Square offer some of the most powerful equipment in the game, as well as boosters which increase the level of enemies. 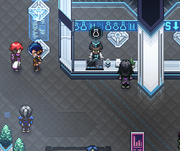 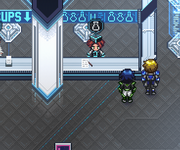 Only one quest is available in Rhombus Square: