The Ring of Spiders is located in the Nesting Ground, Sapphire Ridge, the same place where Lea finishes the Trial of VIgor. After Lea has defeated the Twilight Master he mentions that one of his brothers has prepared another endurance trial for Lea, which is exactly the Ring Of Spiders. 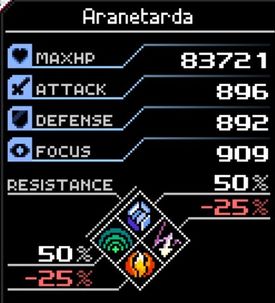 The endless mode is one of the most interesting challenge in the game. In this mode, Lea is going to encounter endless waves of spider attacks and survive as long as she can. Scores are rewarded according to how many enemies are killed. The final goal of this mode is to obtain the highest score possible before Lea is overwhelmed by the spiders.

On entering the arena, there are only three spiders at low levels. New enemies will spawn as Lea eliminates previous ones. And they will get stronger and stronger. Eventually their level is capped at Lv. 99, which provides them with nearly 85,000 HP and 900 ATK. It is impossible for Lea to obtain such high attributes in the current version (1.0.2). One needs to be very careful to survive these tough enemies.

We will introduce a strategy for this mode in the next sections. Theoretically this strategy allows Lea to survive infinitely long - as long as you are not tired of this game. This is because the toughness of the enemies stops to increase if the enemy level reached Lv. 99.

Some equipments are very helpful in this mode. Before starting the challenge, it is highly recommended that Lea equips all of them.

Some Combat Arts are also very helpful. Before entering the arena make sure your circuits are swapped to the right branch.

The common strategy is very similar to fighting Aranetarda, which is weak to Heat(-25%) and Shock (-25%). The monster has three different types of attacks: 1) spider webs which slows down your character movement (neglected if you have LV62

Old Geta equipped); 2) charged wave-based attacks which deal moderately damage; 3) ice attacks from above (triggered by 3 monsters together), which inflicts

The rule number one is try to avoid their ice attacks whenever possible. Never take it head-on. Lea will be sitting ducks on the arena if she is inflicted the Chill effect and walking on the spider webs, which also makes it significantly harder to avoid a second ice attack. Remember that the ice attack cannot be guarded even with two Bastion Circuits (from Cold circuit tree) activated. In case you cannot evade an ice attack, swap to the

Cold mode to reduce the damage and protect yourself against Chill.

The endurance mode can be further splitted into 3 phases. In each phase a different strategy is applied.

Phase 1: This is the beginning phase, which is the easiest part. There are only a few enemies on the arena and can be defeated using any method. Just remember not to kill too fast otherwise your combo may break.

Phase 2: After killing enough enemies, the max number of enemies on the arena is increased, and the enemy level begins to match yours. It is a good idea to use group attacks such as Calamity Trigger and Ragnarök. In this phase you will earn a lot of scores by eliminating multiple enemies simultaneously. Don't get yourself element-overloaded while you are enjoying the slaughter. Keep an eye on the element overload meter and fit several Neutral attacks into your Heat/Shock attacks. Use dash wisely to avoid ice attacks.

Phase 3: The enemies become much tougher and you are under-leveled. All of your attacks are not very effective. At this stage the main damage actually comes from the

Burn effect. Try to shoot Flare Burn! into the spiders to set them on fire. The Crimson Strike is even a better choice since it is a dash Combat Art and does not increase the element overload meter. Note that you will also need to attack the enemies to replenish your SP bar and be careful with enemies' charged wave-attacks. A safe choice should be dashing into the enemies first, attacking in Neutral mode, and dashing out - in a hit-and-run manner. If your HP is too low, try to dash out first, then swap to the

Wave mode, and wander around the arena to wait for HP regeneration. If you have 6 SP you may as well consider using Karma Scale just before enemies' ice attack. Using this strategy Lea is able to survive infinitely in this endless mode.