The Uber Beta Mouse Bot is a Monster in CrossCode. It is found in the Enemy Rush in Autumn's Rise.

The Uber Beta Mouse Bot is a small, mouse-shaped robot made of grey metal. It looks identical to its variations the Beta Mouse Bot and the Ultra Mouse; the three are distinguished only by their behavior.

At first appearance, the Uber Beta Mouse Bot is indistinguishable from its non-aggressive counterpart, the Beta Mouse Bot. It darts around at random, pausing in between and seemingly ignoring the player. The difference between the two only becomes apparent when the Uber Beta Mouse Bot begins its attack. It approaches the player, turning red and yelling "DIE!" It then proceeds to rapidly dash through the player several times, damaging them on contact. 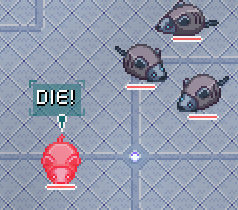 The Uber Beta Mouse Bot is a very weak enemy, and can be destroyed in only a few hits from even a low-level player. The real threat is that they usually appear in large groups, making it impossible to destroy all of them before they attack. Try to finish off as many as possible before they begin to attack. Once they start swarming, dashing away from the crowd of enemies may help to reduce damage taken, although those with more health remaining may wish to take advantage of the tightly grouped enemies to cut through them with melee attacks. An area-of-effect Combat Art can decimate the weak and tightly-grouped enemies at this point.

Autumn's Rise
Inside Observatory: Part of the Enemy Rush challenge (x12 in round 15; x1 in round 17)