The Ultra Mouse is a Monster in CrossCode. It only appears in in the Enemy Rush challenge in Autumn's Rise.

The Ultra Mouse is a small, mouse-shaped robot made of grey metal. It looks identical to its variations the Beta Mouse Bot and the Uber Beta Mouse Bot; the three are distinguished only by their behavior.

Unlike most enemies, the Ultra Mouse is not aggressive and will not damage Lea. It alternates between two main phases in battle. On first being encountered, it yells "Come at me!" and moves slowly towards Lea. At this time, it has extremely high defense, and it is difficult to deal significant damage to it. Once it approaches Lea, it turns red and slowly charges to enter its alternate phase, accompanied by an "Uber Charge" loading bar. Once it enters the second phase it yells "Nope!" and quickly dashes away. During this phase, it is much more vulnerable to damage, but it dashes around constantly and unpredictably at high speed, making it very difficult to hit. After a short period of time, it returns to its first battle phase. 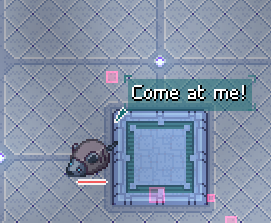 Although the Ultra Mouse does not attack, and can therefore be destroyed through brute force and patience, some strategy may be helpful to keep the battle to a reasonable length. Pushing the enemy into a corner while it charges for its second phase may allow you to land a few hits while it is weak before it can escape. Hitting it with a melee combat art right as it changes phases may also stunlock it into the second phase, allowing you to deal high damage to it.