Zir'vitar Temple, or the Shock Dungeon, is a Location in CrossWorlds. It is one of three Ancient temples located in the centre of Gaia's Garden, along with So'najiz Temple and the Grand Krys'kajo. Zir'vitar can be completed either before or after So'najiz, making it the fourth or fifth dungeon in the game. Unlike the other elemental dungeons, there isn't a chest key hidden in Zir'vitar Temple, but the Wave element is obtained here and unlocks many areas in Gaia's Garden that could only be reached through wave teleporters. The temple makes use primarily of enemies and obstacles based on the Shock element, and introduces the Wave element and associated Puzzle Elements in order to overcome them.

The temple has four floors, with the lower three having several rooms in an east-west line and the upper floor consisting only of the boss room. Lea enters the temple at the west end of the ground floor, and immediately climbs to the first floor. After continuing east for a few rooms, she returns to the ground floor and follows it east to the center of the temple. Here, the path splits and the goal becomes to collect two keys, which are found by continuing east on the ground floor and by doubling back to the west on the first floor. These unlock two gates on the ground floor, one on each side of the central room, which allow Lea to reach the corresponding sides of the first floor central room, unlocking the puzzle there. This puzzle grants access to the second floor.

On reaching the second floor, Lea must head east, reaching the Endurance of Waves, a long gauntlet of enemies that must be fought successively without saving or leaving combat. This notable challenge, along with a similar one in the So'najiz Temple, serves to replace the mid-bosses fought in the larger Temple Mine and Faj'ro Temple. Immediately after completing it, the Wave element is unlocked. Lea then descends to two previously inaccessible areas on the first and ground floor, where the temple's final bounce puzzle is located. Completing this allows her to climb through one last battle on the second floor to reach the third floor boss room.

The only connected location is Gaia's Garden, via Entry Test and Shocking Surprise. 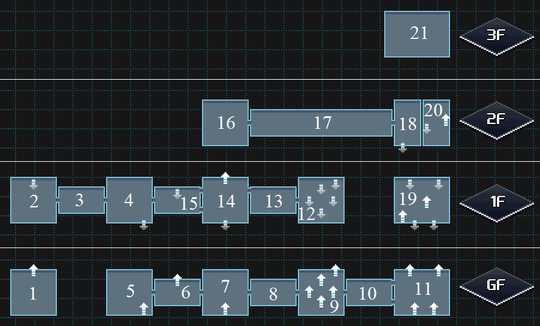 The Zir'vitar Temple is surprisingly low on treasures, with only five chests being located here.

What is that anyways?
Obtain the Wave element after in Chamber of Wave on floor 2F.
A Shadow from the Past
Defeat the Plasma Phantom at the end of the temple, in Shocking Surprise on floor 3F.
Grand Scavenger
Obrain all chests in Zir'vitar Temple; see #Chests.
At the Speed of Sound
Complete the entire temple within 60 minutes to beat Emilie in this dungeon race.